The effects to Superman's continuity were felt for approximately 15 years. 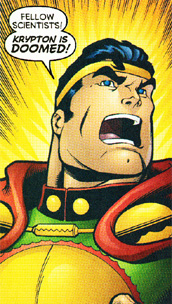 However, during that time, based on positive fan response to DC's reprints of classic comic book material, the popularity of Kingdom Come, Grant Morrison's work on JLA, and the praise garnered by the retro-Superman storylines that ran through the comic books in 1998, a few folks at DC Comics began to realize what some of their fans had been insisting to them - that there is a world-wide recognition of and resonance with the extensive Superman heritage that DC had been trying to ignore.

Perhaps it was finally time to re-incorporate some of those elements back into the mythos?

To avoid the risk of possibly alienating fans as had been done in 1986, any changes that might be introduced to the established continuity would have to be introduced on top of it, rather than replacing it.  DC would go to great lengths to make it clear that they were working within the current, post-1986 continuity.

Readers had already seen the reinterpretation of traditional elements of the saga:  A new "Death of Superman" story, a new "Superman Red/Superman Blue" storyline (both inspired by Jerry Siegel's 1960's stories of the same names), and the reintroduction of the Phantom Zone and the Bottle City of Kandor had all been received with much fanfare (and no small amount of criticism) during the 1990s.

In 2000, under the leadership of new Superman editor Eddie Berganza, writer Jeph Loeb re-introduced Bizarro #1 as the first similar step by the new creative team.

But the intent to create what was in effect an all-new version of Superman did not became crystal clear until the first issue of 2001, Superman #166

In this newest re-interpretation of Superman's classic origin, as told by Jeph Loeb and Ed McGuinness, it was revealed that John Byrne's vision of Krypton as a cold and antiseptic dystopia was in actual fact a fiction - a "folly" that Jor-El had constructed in an attempt to prevent Superman from having to suffer the emotional agony of mourning the death of a beautiful civilization - the true world of his birth, a Krypton very much like the Silver Age version.  In effect, both versions of Superman's origin were successfully acknowledged and incorporated into the legend.  Superman's and Krypton's heritage were now restored to their former glory.

In the follow-up storyline, Return to Krypton, there were some new additions made to the Superman mythos - General Zod now had a key role in causing the residents of Krypton to reject Jor-El's warnings of doom, and while Krypton enjoyed having a glorious appearance much like that with which Wayne Boring had once endowed it, Kryptonian science and culture now also bore some striking similarities to those of the Salkind movies.

The end result of this storyline was to create a new Superman who was a synthesis of all those who had come before.  Every era was acknowledged and incorporated.

Superman still contained many of the traits that his 1986 re-invention had given him, and the story line and continuity continued to be a direct continuation of that which had been laid down in 1986's Man of Steel mini-series -

but they were now continuing Superman's previous incarnations as well.  Superman himself was now endowed with many characteristics from the Silver Age continuity; the Bronze Age; the various cartoons, television shows, and movies; and even from Jack Kirby's short tenure.

"We've never felt that we had to strictly follow every word of the new origin of 16 years ago.  As the mythos grows, we can use pertinent pieces of the past and work them into the new story."

Far from just being a simple throw-back, however, all of these traditional and disparate elements continue to be combined in new and exciting ways.